The collections at Botanical Garden of Barcelona contain representative samples of the plants that grow in the Mediterranean climate, a climate characterized by marked seasonal variations, with hot, dry summers and mild winters, while most rainfall occurs in spring and summer. 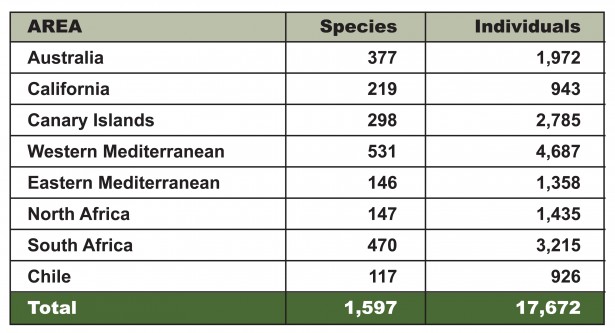 The Mediterranean basin is not the only region in the world that has a Mediterranean climate. Several other regions, situated between latitudes 30º and 40º in both the northern and southern hemispheres, also share this climate type, namely, California, central Chile, southern South Africa and south and southwest Australia.

The similarity of the landscapes in these regions provided the inspiration behind the Botanical Garden of Barcelona. The plants are organized in sectors corresponding to their geographical origin and landscaped to mimic their natural habitat. Higher areas of the Garden contain Mediterranean forest landscapes, while central and lower areas feature shrubland communities.