The decline in the numbers of pollinators on all the world’s continents is jeopardizing the survival of
plant species, the sustainability of our agriculture, and, indeed, human life. Nine out of every ten
plants need an insect in order to bear fruit and seeds, and it is calculated that 75% of food produced
around the world depends on insect pollination. Given this situation, the Museu de Ciències Naturals
de Barcelona (Natural Science Museum of Barcelona), with the support of the European, Spanish,
Catalan, and municipal administrations, decided to create this exhibition to raise public awareness of
the essential role of pollinators, and particularly wild bees, in guaranteeing the survival of the
majority of plants on the Earth. Most of us know about honey bees, yet these are but one species
among countless others. On the Iberian Peninsula there are around one thousand different solitary
bee species that do not live in hives or make honey, and they are the true heroes of pollination and
of this exhibition. 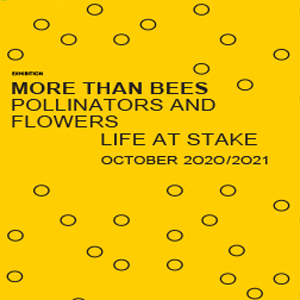 Taking a visual and educational approach across several different reading levels, to reach everyone
from schoolchildren to the scientific community, this exhibition recreates the natural life of bees and
uncovers how pollination works, how bees interact with flowers and insects, and the role bees play
in the ecological balance of our planet. It goes on to explore the main causes of the constant decline
in insect pollinator populations, which include the use of insecticides, the fragmentation and loss of
habitats, environmental pollution, and climate change. The exhibition proposes good practices that
all of us can undertake to turn this situation around, such as responsible consumption, decorating
balconies and terraces with aromatic plants for local pollinator species, and building bee hotels,
among others. It also outlines the different environmental initiatives currently being promoted by
institutions, associations, and European, state, regional and local governmental administrations, and
concludes with a schedule of activities for all audiences.

But that’s not all! The exhibition continues outdoors in the Insect Garden, comprising a bee hotel,
an aromatic plant spiral, and a fruit tree orchard, enabling visitors to see first-hand everything they
have learned from the pollinators.

Visit More than bees. Pollinators and flowers, life at stake for more information and useful information to visit it.

The Museum and the Garden, new members of the Global Coalition for Biodiversity

The Museu de Ciències Naturals de Barcelona (Natural Science Museum of Barcelona – The Nat) and
the Jardí Botànic de Barcelona (JBB – Botanical Garden of Barcelona) wish to mark the opening of the
exhibition More than bees with their entrance into the Global Coalition for Biodiversity, a European
Commission initiative. The Garden will thus be the second to join the coalition, after the Jardim
Botânico do Porto (Botanical Garden of Porto), and the Museum will be the first such member in
Spain and the fifth in the world.

This coalition encourages national research centres, such as natural science museums, botanical
gardens, zoos, aquariums and parks, among others, to mobilize and make their voices heard on the
crisis of nature and the alarming decline of species.

The aim of the coalition is to join forces for the UN Biodiversity Conference (COP15) in 2021. It is
anticipated that by the end of 2020 more than 500 institutions will have signed up.