In this fourth edition, the jury decided to award the Nat 2021 Prize to Nalini Nadkarni, for her enthusiastic work in research and dissemination of biodiversity and the environment, focused on the study and defence of forests around the world; and for the creation of original communication and educational tools aimed at all areas of society that also address gender issues and groups at risk of exclusion. 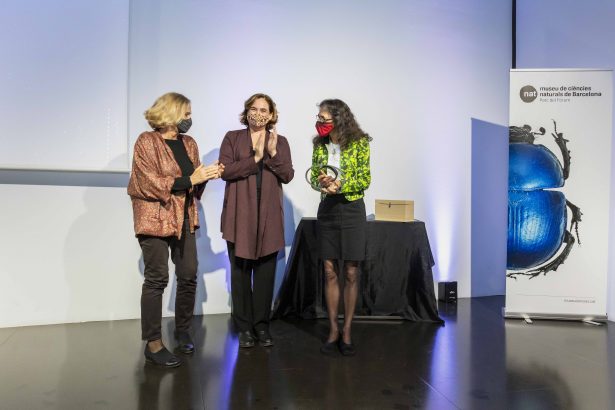 Nat 2021 Award Ceremony. From left to right: Anna Omedes, director of the MCNB, Ada Colau, Mayor of Barcelona and Nalini Nadkarni, winner of the 2021 PremiNat Award

Centre Excursionista de Catalunya (Hiking Club of Catalonia) and the Institució Catalana d’Història Natural (Catalan Institute of Natural History), for their great academic and educational work with the general public on the understanding, exploration, research, and dissemination of natural sciences and the preservation of the environment. A task begun in the 19th century, successfully continued to the present day, and which has made a decisive contribution to the history of the Museu de Ciències Naturals de Barcelona (Barcelona Museum of Natural Sciences).

The Nat Award jury was formed by:

This year’s winner, Nalini Nadkarni, biologist, ecologist and activist, gave the lecture “Weaving a tapestry of science, nature, and people to protect our one Earth”.

You can follow the event and the conference live on the NatTV channel.